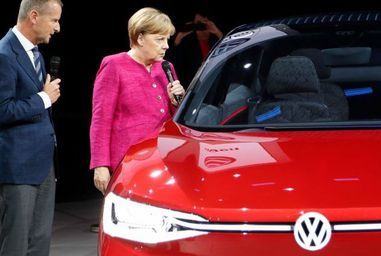 The Germangovernment has announced details of new arrangements to raise subsidies for purchasing electric vehicles (EVs) and plug-in hybrid electric vehicles (PHEVs). The agreement between the German government and VDA, the German automobile industry association, was reached following a meeting aimed at the mass production of cleaner transportation.

The measure, which will run to the end of 2025, is designed to help Germany move towards sustainable mobility.

The aim is to increase the number of EVs on the road to 700,000 units. The cost of the measure will be split evenly between the government and the automotive industry. Germany's long-term target is to have 10 million EVs on the road by 2030.

At present, Germany has 47 million passenger cars, of which around 83,000 are fully-electric EVs and more than 408,000 are hybrids.

EVs represented 1.68% (31,059 units) of all new cars bought in Germany in the first six months of 2019. Top-selling EV brands included Tesla, Renault and VW. The most popular models included the Tesla Model 3, Renault Zoe and BMW i3.

The deal between government and industry also aims to increase the number of charging stations, of which Germany currently has 21,000. The aim is to add 50,000 charging stations by 2022 and the German car industry will finance 15,000 of these.

The deal coincided with the start of production on the ID.3, the first of Volkswagen's fully-electric ID range. The VW factory at Zwickau is projected to produce 100,000 EVs in 2020 and the ID.3 will be priced around €30,000.

Experts predict it will be the first volume-selling EV in Germany, and Europe as a whole, although other German manufacturers are set to launch a wide range of EVs and PHEVs shortly.

Speaking at the VW launch, German Chancellor Angela Merkel said: “We can now say that Zwickau is a pillar of today’s German auto industry and of its future. Our task as politicians is to create a framework where new technological innovations can take hold.”

Merkel said the government would invest €3.5 billion to 2035 in building charging stations for electric cars. She said Germany needed 1 million charging stations by 2030 and urged carmakers and utility companies to play their part in helping to build the necessary infrastructure.

The new subsidies are in contrast to those in the UK where government has taken a conflicting approach by reducing its own subsidies for low-emission models.

A year ago, the plug-in car grant was reduced from £4,500 to £3,500 for pure electric vehicles, while the £2,500 subsidy for plug-in hybrids was abolished entirely. Ministers have already hinted that the subsidies for electric cars could be reduced.

In the government's 'Road to Zero Strategy' document, it said: "As the market becomes better established and more competitive, the need for direct government financial support will decrease.

"We therefore expect to deliver a managed exit from the grant in due course and to continue to support the uptake of ultra low emission vehicles through other measures.

And in an interview in September, transport secretary Grant Shapps said the subsidy will 'go eventually' as the government explores terminating the incentive.