Sales of electric vehicles taking off across Europe, says JATO 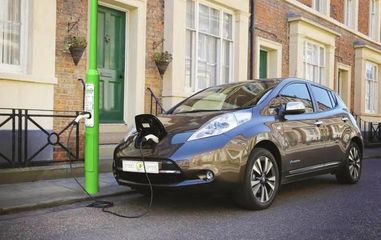 “Even if they still make up a comparatively marginal part of the overall market, electric vehicles are definitely becoming the industry’s bright spot during these challenging times,” said Felipe Munoz, global analyst at JATO.

The increase in market share of EVs came as a result of an outstanding performance in sales of BEVs - where volume was up by a huge 98% to 23,200 units.

Hybrid vehicles also performed well in July, as demand increased by 27% to 56,800 units. The rankings were dominated by Toyota and Lexus, but there were notable results from Mercedes, which came third, and Land Rover, whose new Evoque model became the fifth best-selling HEV during the month.

The JATO figures also revealed that sales of diesel models continued to fall and accounted for just 31% of all models sold in July, down from 36% in July 2018.

Meanwhile, sales of gasoline models continued to increase and were up from 56% in July 2018 to 59% this year.

Alternative Fuel Vehicles' sales increased from 5.8% in July last year to 7.4% this July, as AFVs gained ground at diesel’s expense.

JATO said that, despite continuing economic uncertainty and diminishing consumer confidence, the European car market had registered growth in July, with registrations up by 1.2% to 1,325,600 units.

Although the growth was marginal, it was a significant improvement on the drop in sales seen in June, when registrations fell by 7.9%. However, the result is not significant enough to offset the market’s overall performance so far in 2019, with year-to-date figures showing 9,723,400 vehicles have been registered  - a 2.5% drop on the same period last year.

“There is still uncertainty in Europe. After many years of growth, the market shows signs of deceleration that is likely to continue if the German economy fails to grow again,” said Felipe Munoz. The growth seen in July was largely driven by midsize and small countries, as 14 of the smaller markets of the 27 countries analysed in JATO’s insights saw increases, while some of the larger, more established markets saw falls. 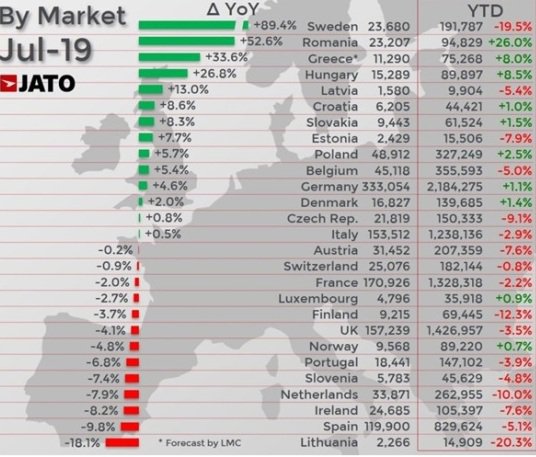 Commenting on the increase in sales of EVs across Europe, Thibault Alleyn, who heads up Fleet Logistics’ consultancy through the independent FleetVision business, said that organizations still needed to do more to structure their fleets around EVs.

“We are now at a stage where the swing to electrification is being confirmed by all sides, from governments, manufacturers and suppliers, and now the latest sales figures provide further confirmation of this.

“The time has come for large fleet operators to adjust their procurement strategies, their eligibility-selection-usage policies and their cost monitoring processes accordingly. Given the long term importance of this shift, such preparation should not be rushed through without adequate and independent guidance.

“We have been working with numerous large clients on this and notice that while most are open to the idea of electrified cars, the numbers which are properly prepared are, as yet, very limited.

“This is where our expertise comes in and we are happy to provide guidance to any clients that wish to embark down a route towards greater electrification,” he said.